Packrafting the South Fork of the Flathead

Updated 6/29/21
Ready to book your packraft rental?  Book online now!
Summer 2021 condition updates:
I've had a lot of questions lately about flows and how low is too low to float the South Fork of the Flathead specifically. I did some digging and found a renter who floated the South Fork in September 3 years ago. He and another guy hiked up the South fork to Big Prairie ranger station and were on the river the first 5 days of September.  There are 7 miles between Big Prairie and the confluence where the South Fork starts.  The section up river from big prairie is flat and deep so I don't think there'd be much portaging there.  He said they had to get out on a few gravel bars but were getting out a lot to fish anyway so it didn't seem to make a difference.  As of 7/21 current flows are 1000 fps on the nearest South Fork gauge- according to the data there would have been 390-460fps during the renters' trip in September of 2018.
Heard from a group that got off the river 7/17 that there is a huge strainer spanning the South Fork of the Flathead near where Gordon Creek comes in to the South Fork.

15 down trees on Young's Pass.  Only a few that had to be walked around.

Put in at Babcock creek, the big strainer on Young's creek (gorge) from last year is gone.  There is a small strainer right after the 1st major left in the Young's gorge, on river right side, basically in the 1st rapid.  On 7/1 it could be paddled around in a packraft and in lower water it would be an easy portage and you could possible paddle under.   The rest of the gorge was mostly rock dodging.  A ranger said he will run the gorge this week and will put flagging on small strainer

South Fork- no portages on south fork, hiked up white river- 30 downed logs, got out of white once- White runnable on 7/3/21.  Report came in on 7/8
The South Fork of the Flathead in Montana is perhaps the best packraft river in the lower-48. There are 3 main reasons for this as I see it:

1.       It is very scenic.  Especially toward the end of the trip, going into  Meadow Creek Gorge.  The deep green water and the canyons make for some great pictures.
2.       It is also very remote.  It is located in one of the largest wilderness areas in the lower-48.   For much of the trip you are 30 miles from the nearest road.  So you can really get away from it all!
3.       The fishing is good.  Not as good as the first time I fished it 5+ years ago, in my pre-packraft days, but still good.  It is also one of the only places you can legally target bull trout in Montana and maybe the Northwest.  According to 2016 regulations it is open the 3rd Saturday in May through July for Bull Trout catch and release.  Keep in mind that is only on the South Fork and not any tributaries, you also can’t keep them and technically you are supposed to get a free bull trout targeting “stamp” on your license (last time I checked anyway).

A number of people have published magazine articles on packrafting the South Fork of the Flathead.  Unfortunately most of those articles are more on the inspiring side and less on the practical, which is what this article sets out to do.  Full transparency: I own a packraft rental company, Backcountry Packraft Rentals, so my business benefits greatly from the popularity of this river.  There is definitely the possibility of the river becoming permitted in the near future, but if pack rafters continue to act as low impact backpackers, there is a chance that the river will continue to be open to anyone who wants to raft it.

This summary might be more than you want to know, but hopefully it will be informative if you are actually planning on doing the trip.  If you have specific questions please feel free to contact me.

I have done it three times now and have had numerous customers do it and listened to their feedback on different routes.  The first and third times I did it via Young’s Creek and the second time via the White River.  The first and third time we entered the Bob (Bob Marshall Wilderness) via the Young’s Creek Pass off of Lodgepole Trail Head(just north of Ovando, MT) and the second we started from Bench Mark (West of Augusta, MT) and went in on the South Fork of the Sun then up and over White River Pass.  The White River trip was supposed to involve floating the White River but the water was so low (July 20th on a dry year)  that we ended up just hiking to the confluence with the Flathead.

I learned a lot on all three trips and from talking to customers about the area and about packrafting.  Here are a few tips specifically for this trip: 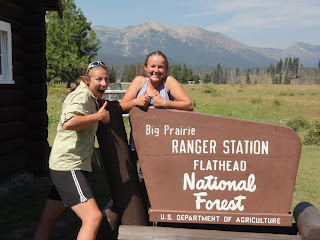 If you are hoping to delay this river becoming a permit river, I would suggest:
1. Having your fires below the high water mark.
2. Picking up other people's trash if you see it.
3. Not cutting other boats off or paddling through fishing holes that people are fishing
4. Fly fishing instead of spin fishing
5. Pulling your barbs down
6. Limiting how many holes you fish
7. Fishing more for bull trout, because you won't catch as many cut-throats and the ones you catch will be bigger
8. Pulling your fish in quickly and taking the hook out in the water
It might be inevitable that it will be a permitted river just because of the sheer number of vessels packrafting brings but this will slow it.
Helpful resources: Bob Marshall Wilderness Map and Flathead River Guide in PDF form.

If you do need a rental, I am happy to accomodate that need!  Please check out my website: https://www.backcountrypackrafts.com/

Posted by Backcountry Packrafts at 2:07 PM