Losing Your Packraft Air Valve Cap in the Backcountry

It's one of those moments that could ruin the trip you look forward to all year.  The rest of my group had already inflated their rafts and were traveling downstream to find a better spot for lunch.  We were 25 miles from the nearest road and 20 miles from where I last inflated my raft.  I unrolled my packraft and there was no air valve cap.   How was I going to keep air in my raft?!?  I had three days of floating ahead of me and it was nearly 30 miles to where we would be picked up! 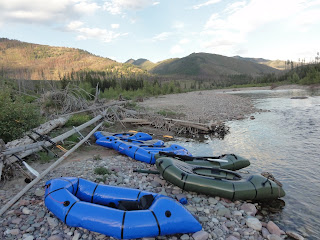 I tied off my inflation bag to keep most of the air in and floated down to meet the rest of my party.  I had to orally inflate it several times in the half mile I traveled on the river so I was definitely going to need a better long term solution.  For a second I pictured the spot where I had deflated my raft and rolled it up on a gravel bar.  I thought, "some fisherman is probably holding it right now wondering what it is."

By the time I arrived I had thought of several different ways to remedy the problem and avoid having to pack my raft out (an embarrassing and demoralizing thought to say the least).  Most of my ideas involved taping over the valve, either with duct-tape or tyvek tape.  Luckily my friend Benn had a better idea: 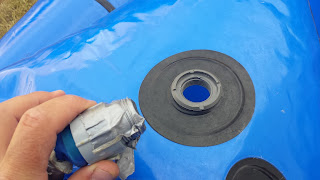 Rather than tape over the valve that was attached to the raft he taped over the inflation bag valve opening with duct-tape, letting the tape overlap all the way up the threads.  Then we screwed the inflation bag back into the air valve opening.  The duct-tape over the valve-end shut off the air and the duct tape around the threads seals it in tight like a cap would.  I had to inflate the raft orally, but given the situation, it was a small price to pay for not having to walk out or re-inflate my raft every 100 yards.  I did notice my raft lost a little more air than the others, but the difference was pretty minimal.

The easy way to prevent this situation is to always make sure the cap is attached to the string before rolling the raft up.   However, if you're like me, you don't always try the easy way first.  Hopefully if this ever happens to you or someone you are packrafting with remember this trick and you can really save your trip.  Also, always bring duct-tape!
Posted by Backcountry Packrafts at 2:42 PM No comments: